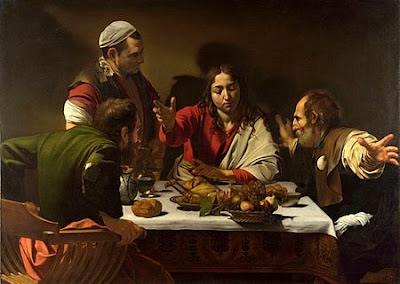 Today's gospel passage is from Luke's gospel, chapter 24, verses 13 -35 - The journey to and subsequent meal at Emmaus.

This famous painting by Caravaggio of the Supper at Emmaus, which hangs in the National Gallery in London, captures the moment when the disciples recognised the companion who had accompanied them to Emmaus. Jesus is depicted as beardless – unusual in the iconography of the era – which may have been an attempt to explain why they had not recognised him on the road. Caravagio paints a fourth person, no doubt a servant, he also paints the two disciples as men, when in all probability, one of them was a woman.  Check the passage, once Jesus appears on the scene, only one of the travellers speaks.  In that culture, a woman who was speaking with a male companion, would suddenly become silent if a stranger approached and struck up a conversation.   Caravagio was first and foremost an artist rather than a biblical scholar and this is his interpretation of the scene but it can still lead us into a meditation on the passage.  Like Rublev’s icon of the Trinity, the composition of the painting enables the viewer to draw close to the table – to join the group – to experience, and not merely observe – in this case, the drama of the moment when the reality of the resurrection bursts into the disciples’ lives.

Why not try to see if your prayer life can be enhanced by meditating on art. Sit with the picture and imagine yourself drawn into the scene.  What would your feelings be?  What would you like to say, or ask?  Let God use your imagination and trust Him to be with you. In this scene, as in the biblical account, although Jesus is the guest, He takes the role of the host, taking, breaking and blessing the bread; think of how it reflects the last supper.  Sit with this painting and let Jesus feed you today.