Most of you will be very familiar with the passage from the Bible that is so popular with wedding couples.  Margaret Silf wrote a wisdom story about these Christian qualities which points out that, as the Bible says, the greatest of these is love.  The gist of it is as follows:

Faith and Hope were twin sisters but very different in personality.  Faith was always wore her best clothes and was very fussy.  She was a sweet but ailing child.  Her sister Hope could be quite strong, but being something of a wild child, would often run out just when you needed her.

As Faith got older she strengthened but her limbs grew stiff and she became rather rigid. Faith could be judgmental.  Hope on the other hand, had grown very weak over the years.

One day they were surprised to find that, although they had always thought that they were twins, actually there was a third sister called Love.  Once love had been introduced to Faith and Hope, things began to change; Love helped Faith to become more relaxed and compassionate and helped Hope to become more reliable.  Now they live side by side in perfect harmony.

And the moral of this story is - never forget to apply love to your faith and hope!
Posted by Rev'd Lyn at 06:48 No comments:

Does anyone have a wheelbarrow that they can donate to church to assist with the grounds maintenance please?
Posted by DG at 17:13 No comments:

Last week I spoke about my visit to the monkey forest which is part of the Trentham Estate in Staffordshire. This week I would like to tell you a little more about these monkeys.

As we walked through the forest, there were guides situated along the pathway who was very knowledgeable about the monkeys and would answer questions or share with us various interesting facts about the monkeys.

We learnt, in the forest, there were two troops of monkeys, one living at the top of the forest and the other further down the forest. The two troops live totally separate lives and do not mix with the other troop, ever.

We saw several baby monkeys, who looked so cute riding on the backs of their mothers

The period of gestation is 5 months and the babies are born at night in the tops of the tree away from menacing predators. The staff are totally unaware of the baby being born until mum comes down from the treetop in the morning bringing her baby with her. It is never known who the father is but any male monkey will try to exert his authority and claim parental ownership. The fracas I spoke about last week came about because a monkey was trying to exert his parental authority over another male monkey by running off with the baby. Mum was very unhappy about this as she did not trust him. Mum wasn’t going to sit back and let this happen. She let him know in no uncertain terms that she was displeased with him by chasing after him. Other monkeys joined in the chase, scrabbling up and down trees. There was a cacophony of noise which got louder and louder and it was over almost as quickly as it had started when the baby was safely returned to his mother.

Seeing the monkeys in their family unit and observing the way in which the monkeys all came together and supported mum in getting her baby back reminded me of the love our heavenly Father has for us. Just as the monkey’s mum was never going to abandon her baby to someone she didn’t trust, our heavenly father will never abandon us. He will always be there for us whatever the circumstances, bringing us back into the fold.

Sadly the technology let us down today (or the person operating the technology) so I have produced a Non Eucharistic service for this week.

We just have the hymns this week, for the Service please go to Rev'd Lyn's YouTube channel here
The God of Abraham praise:
When I needed a neighbour:
Posted by DG at 16:05 No comments:

We apologise for the poor quality of sound during this morning's live streamed service, please bear with us as we find out what works and what does not.
Posted by DG at 15:47 No comments:

Scaling the rocks we face in life 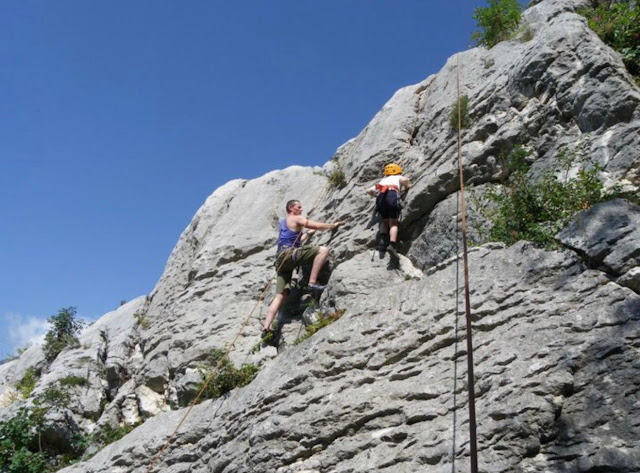 This is a photograph of my Grandson on holiday in Italy, he was six years old at the time and I was amazed, both at his courage and his determination not to be defeated.  As I look at this photograph, I realise that his confidence came from the fact that he knew that his Father was right there with him.

The photograph below shows Robert starting a climb with his Father belaying for him.  Belaying is described as the cornerstone of climbing safety; it involves holding the climbing rope so that the climber is safe if they fall off the rock, it prevents them from hitting the ground.

In life, we can find ourselves in some rocky places; we can find ourselves on an uphill climb; we can face problems that seem insurmountable.  It's at times like this that we have to take courage from the fact that our heavenly Father is right there with us, encouraging us to keep going and ready to catch if we fall.  It's as if He has an unseen belay rope, that may not prevent our foot from slipping, but will prevent a mighty fall. 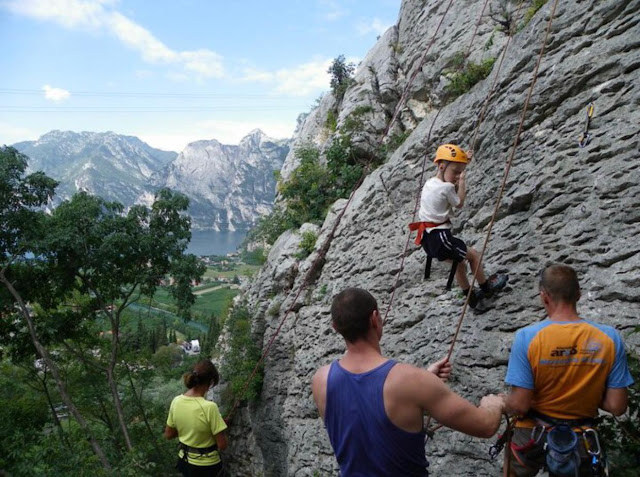