Around the World in 80 Slides 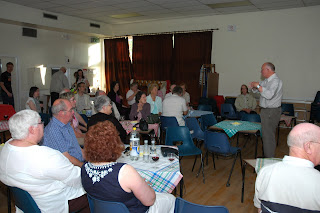 Last night we were entertained by a series of slide shows accompanied by Cheese and Wine. Father Richard presented two shows, the first was a return to Oman where he saw active service with the Royal Artillery. He showed us pictures of himself and Oman in 1972 and then where he had tried to re-visit those same locations. The second show was a holiday in Vietnam where we were taken to the locations whose names reverberated in the memories of many of us.

The last show of the evening was presented by myself and was a memory of the the Pilgrimage Edna and I undertook in late 2007, visiting many of the holy places in Israel and culminating in walking the Via Dolorosa.

With 40 people present there was a really good atmosphere at the show with a mixture of all ages and good fellowship. Many thanks to Julie and Sarah for organising the event, maybe there will be another next year?